Last week I began work in earnest on Dabble, a writing app for novelists. This is my week at a glance.

I started creating a logo, because hey, it’s got to look gooood. I want to this product to be fun to use, to have personality. I’m taking inspiration from Slack.

I looked through a bunch of fonts on Google Fonts typing in “Dabble” to the preview and picked my 3 favorites. Then after consulting with my lovely assistant/wife, Brittany, I chose Comfortaa.

I didn’t like the ligature on the L so rounded that off, tilted the E because I thought it looked nice, and gave it some coloring that makes it more fun, less utilitarian. Between the font, the color, and the E, I thought this conveyed a good sense of mischief.

I also threw up some files into an Amazon S3 bucket for a website, www.dabblewriter.com, so I could show off my logo to Tyler, the twin. And I posted to my friends and family on Facebook about the new company and product. I’m that excited about it.

Unfortunately I discovered my subconscious must have been working hard on Monday. Because when double checking I wasn’t stepping on any copyright toes for writing tools with the name Dabble, I saw I very well may be stepping on toes with my logo design. Hello dabble.co! I must have seen you earlier when vetting the name.

The fonts were too similar, and even the E was slanted. Back to the drawing board. The runner up fonts were Baumans and Megrim. I ended up with the latter because Brittany liked the A and Baumans was still similar-ish to Comfortaa. I present you the Dabble logo.

I also put together a quick attempt at marketing and an email capture so people could sign up for updates. Facebook friends were interested in the progress, and I wanted to be sure to get emails for those who want to be part of a beta. 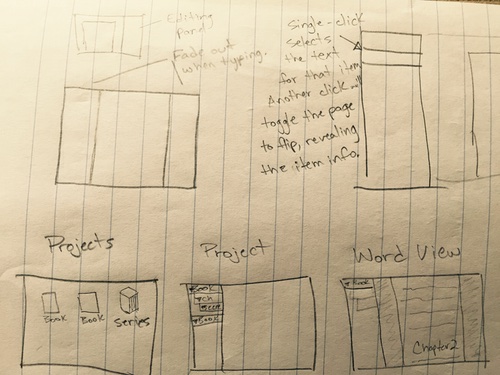 I made the Project List view, which I changed names to Manuscripts view. These are not just projects after all, they are manuscripts.

I started off wanting to make a single novel look like a book and with series looking like a boxed set. I followed http://srobbin.com/blog/3d-css-book-covers/ and had something ok looking, but it didn’t feel right.

I ditched the book idea and went with a simple pile-of-papers approach, since these are unfinished/unpublished works. I think it turned out nicely. 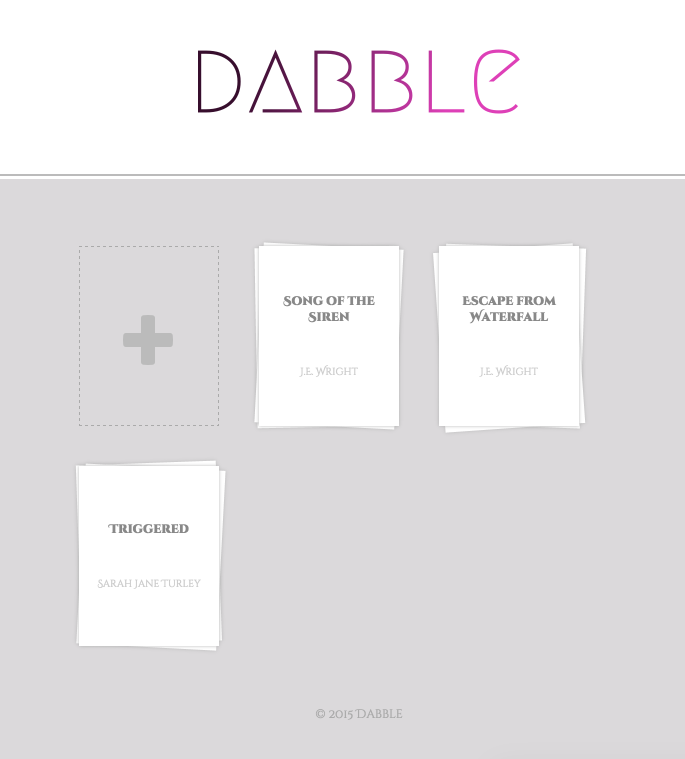 The piles of paper are different from each other, and when you mouse over them they straighten out a bit and raise off the page, like you’re picking it up. I love making little UI interactions delightful. This was very fulfilling.

The day I made it a web app instead of just HTML. I brought in Chip for keeping the HTML in-sync with the data and PouchDB to store the database in the browser (also supports syncing with a server when online). This was just beginning work.

I also added loading messages, again inspired from Slack. Unlike Slack, I leave the message up long enough to read it, allowing a click anywhere to close it immediately. I always want to read those slack messages but too often they disappear before I can. Thank you Writer’s Digest for a compilation of quotes from famous authors.

I set up my base model classes and the loading/saving mechanisms so when a manuscript (actually all manuscripts currently) gets loaded all the objects get linked together by id, and when an object is saved those links turn into ids. Because I want to save sort-order in my manuscripts, I’m storing the data like this:

I got Manuscript creation/deleting working. I added saving of lastOpened date so old manuscripts naturally sort to the bottom (useful if you have a lot of manuscripts).

I also hooked up my manuscript editor page (the one thing I had coming into this week) to display manuscript data.

I imported a 10k word script into the tool to test out a bunch of chapters. Then I did the same 99 more times to test load. It took 8 seconds for the page to load all that data in (in the future I’ll only load the manuscripts when they’re opened) and it still worked like a charm. Page scroll was fast. Everything was snappy. 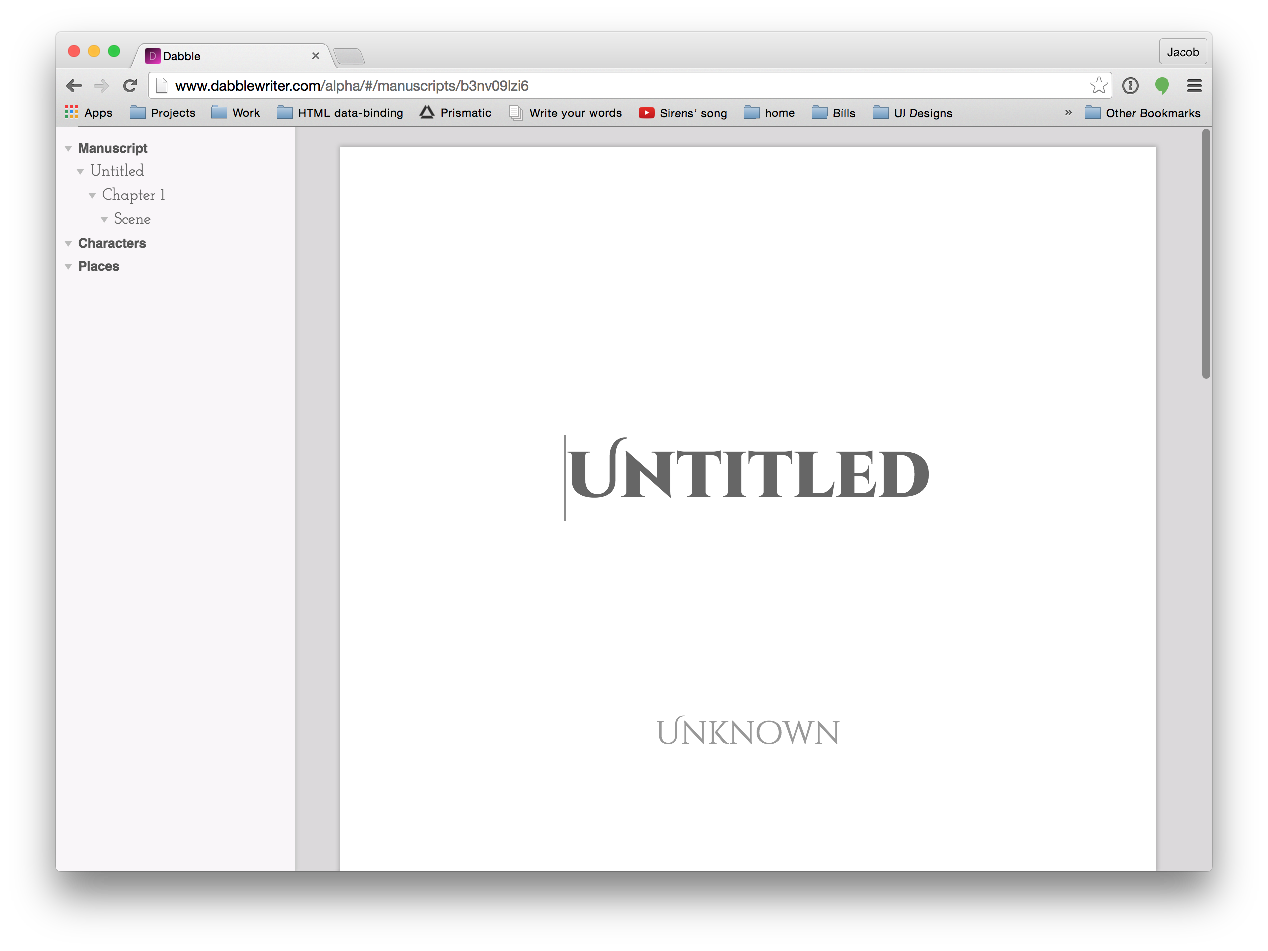 I’m not including a shot of the full script I imported since I haven’t had permission from the author to do so.

Lastly I added scrolling to the book/chapter/scene you click on so you can jump to that place in your script.

I feel really good about what I was able to do in just one week. I’ve only been spending a few hours a day on this outside of my day job. Today I wasted my few hours writing this blog post (ok ok, you’re not a waste), but I’m too excited about this project and my progress to keep it to myself. I feel really good about the product I have envisioned and the direction I’m going.

If you’re interested in beta-testing Dabble, or just want to keep up on its progress, sign up for the newsletter on dabblewriter.com. I have much more on its way.

2 Responses to “First Week on Dabble”